My full name is Eric Benvenue-Jennings. I was born Eric Jennings but I added Benvenue when I got married. My wife, Pam, did not change her name, which was a wiser choice. My hyphenated name has created a lot of minor annoyances so I usually just go by the simpler version.

The only time I had anything resembling a career was from 2002 to 2017 during which time I owned, managed and taught at a hot yoga studio. I have three yoga certifications: Bikram Yoga, Tony Sanchez Yoga and Ghosh Yoga Calcutta. Prior to that I had been employed as a gas station attendant, landscaper, roofer, carpenter, retail manager, theatrical lighting designer, technical director, actor, computer graphic artist, print production technician, Macintosh systems administrator and web site designer.

Apart from my yoga training, I have almost no education. Grades 1–10 were at schools that apparently didn’t think it was important to teach literature, economics, history, civics or anything else beyond rote memorization of basic math. During 10th grade I was on track to drop out of high school but instead got transferred to an alternative program in Woods Hole MA, called Omnibus, that was taught by a bunch of progressive graduate students. I graduated from Omnibus in 1977.

I am a survivor of childhood sexual abuse but I lived with that as a secret for most of my life. Which was exhausting and came with a host of emotional difficulties that I didn’t become free from until I discovered some amazing therapists and an organization called MenHealing for whom I currently serve as a Social Media Co-Coordinator.

I’ve been a writer since about age 12 and I don’t buy the bullshit line that one has to write every day to call themselves a writer. I go through phases. Sometimes I write more, sometimes less. I also don’t agree that one has to know the rules in order to break them. That’s a reasonable premise when applied to saxophone but I believe every human being has a natural voice which they will find simply by exercising it often. I’m not saying I’m opposed to formal learning, mentorship, workshops, writing programs, etc. but for most of my life I couldn’t afford anything like that. Two factors enable me to call myself a writer. I read voraciously and when I start writing I have a hard time stopping. I also agonize over the details. I write, edit, write, edit, write, edit, write, edit so much I have very few pieces which I consider finished.

Sadly, I have a character defect that manifests as a compulsive need to purge. I get great satisfaction from throwing things away. Pam often comes after me when she can’t find something and rightly so. I have deleted most of my best writing. You’ll just have to take my word for it becaause I can’t prove a negative. The cause of this compulsion is a mild form of OCD. And no, I don’t mean that I’m anal retentive, or fussy. My mother wasn’t diagnosed with OCD until late in her life but it was always there. One of my brothers also exhibited pretty strong evidence of the disorder. I diagnosed him myself after his suicide. 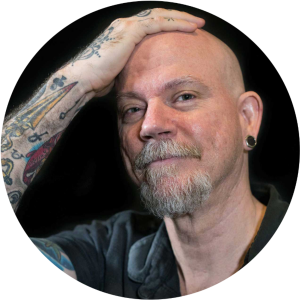 I am a poet, an invocateur, an acccidental yogi and dabbler in patamysticism which is the spiritual branch of pataphysics.

soundtrack: I Am A Bird Now by Antony & The Johnsons